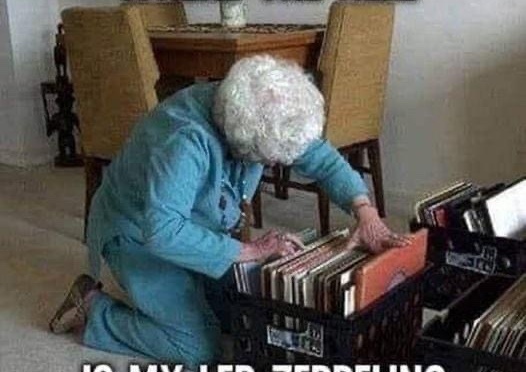 I’ve been thinking of gathering up my vinyl and moving the collection out to the man cave. Back in the day I had over a thousand. But in between moving houses in the 90’s, I stored 2/3’s of them in my MIL’s attic. Big mistake. Huge! When I went back to retrieve them a few months later, they were gone. All of them. Poof! Disappeared. When I cried foul and said what the hell, his mother denied I had ever left them there… which means she gave, or worse sold them to someone. I learned my lesson and never left anything there again, but it hurt. Decades of music and memories, gone.

I’m not that grey, but yeah… that could be me. So now I haunt antique stores and flea markets looking to replace all the albums I lost.

And speaking of salad dressing, (worst segue ever) have you tried this yet? I’m not a big vinaigrette fan because I generally hate vinegar… but this is fabulous. If you see it, give it a go.

Seeing the announcement for these awards made my mind go to all the “tools” in politics these days. They’re much more deserving of being called the biggest tool than any screwdriver or drill bit I’ve ever seen.

This final picture is for The Huntress who will be starting a new job soon. I saw the pins and immediately thought of her.

Please try not to stab anyone on your first day.

37 thoughts on “Random thoughts and a little something for the Huntress.”