Because news you can use is usually depressing.

If you’re ready for your mind to be blown, look up this artist and his beyond bizarre house. Everything is doodled, even the toilet.

Okay, I don’t feel so bad about my outdated Shake and Bake now.

I take it back about not being depressing. That’s the very definition of sad.

In local news there were no takers on this generous offer. Please don’t tell my husband.

And while I enjoy creepy Halloween decorations as much as the next girl? That’s a hard Hell no to disembodied demon doll heads.

After visiting the Penobscot Narrows bridge observatory, we turned our attention to Maine’s largest historic fort which is literally right next door.

Fort Knox, named after General Henry Knox, America’s first Secretary of War and Commander of Artillery in the Revolution. He spent his final years just down the road in Thomaston. And yes, that other Fort Knox in Kentucky is named after him as well.

The first thing we saw upon entering the Fort’s grounds?

I’m guessing this was a Halloween decoration as they host a big event here for the holiday. Or rather, I’m hoping.

The Fort sits on a peninsula jutting out into the Penobscot River and was deemed the perfect defensive spot in 1844. Almost a million dollars was spent on its construction, but it took Congress 25 years to allot those funds and as with most government run projects, it was never actually completed.

But no matter, it’s still an impressive place.

More Halloween decorations, which to be honest annoyed the photographer in me.

Yeah, Stephen King rules. We get it.

A diagram of the fort.

The minute you enter through the sally port you’re struck by how well designed this was.

The granite was local and expertly fitted.

Inside? It’s all about the canons.

Room after room of cannons. Two floors and four batteries contain mounts for 135 of those babies but only 74 were ever brought to the site. Not as many as it could hold, but that still requires a lot of balls. In more ways than one.

These sparrows have it in for our poor cat and are seriously driving him crazy.

All of a sudden there are flocks of them gathering on our back deck and Lord Dudley Mountcatten is positively beside himself with angst.

He cackles, he cries, he paws at the window and howls to go outside.

And then runs right to the bushes where they hide when I oblige.

His Lordship is not a graceful feline and more often than not falls flat on his face.

Unless he’s sticking it in the bush on purpose.

He’s on a leash, but there’s not much walking going on.

Those birds should be ashamed of themselves. Before long Dudley will be needing kitty Valium.

Do you have a bucket list for your own state? Mine is long and varied because somehow we never find the time to see the wonderful things in our own backyard… or in this case, the yard two hours away.

But last week I checked this off. The tallest bridge observatory in the world.. which just happens to have Maine’s fastest elevator. Good thing too, my knee would never survive a staircase 420 feet up.

The construction of this cable stayed bridge was big news in these parts and people anxiously looked forward to its completion. Started in 2004, completed and opened Dec. 30, 2006. And yes, we’re more than a little late to the party.

I’m not sure the pictures do it justice, but trust me it’s quite something.

Was my bad knee happy there were a few flights of stairs after we got off the elevator? No….

But I sucked it up and climbed.

And the 360 degree view was worth it.

Suck on that Kilroy.

I’m including a video that has an annoying reflection of me throughout. Try to ignore that and enjoy the view…

I don’t know if you remember, but last year I posted about a giant rubber duck that appeared out of nowhere in the harbor of a Maine town. No one knew where it came from or who deployed it… but everyone loved it and reported sightings with gleeful enthusiasm.

It’s back…. and yeah. Bigger and better than ever.  

A random floating giant rubber duck is a beautiful thing. 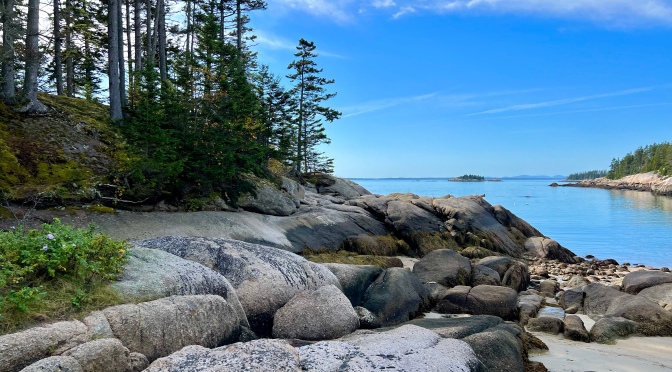 Our last stop in Stonington wasn’t planned, and we just happened to drive by… but it was a lovely end to the day.

Random public access to beaches is common in Maine. They’re not marked, they’re not named, they just are.

And sometimes they have a fabulous rock that looks like a sleeping walrus.

This float had been pulled up for the season.

And if you know anything about the coast of Maine, you know sand is at a premium.

Mostly it’s rocks, which my ever intrepid husband continues to climb… 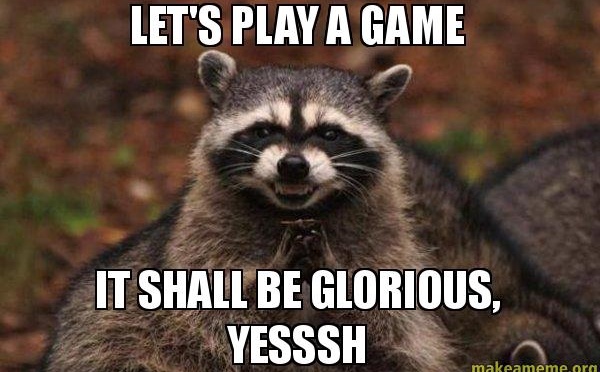 You know you want to.

I’m not sure I can top Benjamin but here goes…

Even Kurosawa would have had a time with that.

After the appearance of Jar Jar, this might have been a good thing.

And I thought it wasn’t possible that film could be any more depressing.

They’re everywhere these days, so that doesn’t seem to be much of a stretch.

Try and trim a topiary with that Ed. 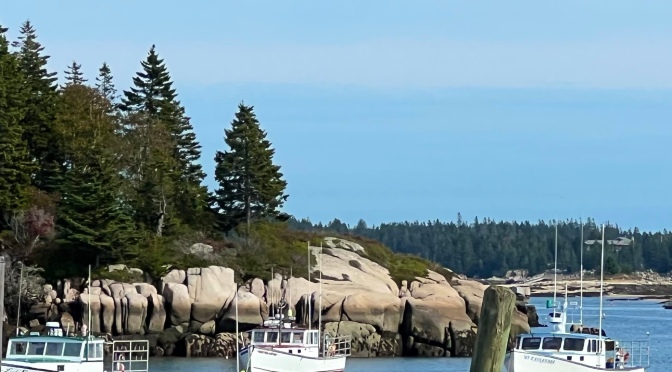 Heading out of the harbor proper, we found some scenically beautiful spots.

We drove at will, no destination in mind. And sometimes cutting down side streets resulted in dead ends.

Other times there were loop roads….

And if you want peace and quiet? Take a tip from that guy.

He certainly had the right idea.

Have you ever checked the search terms on your blog?

I never really thought about how people found my site, just figured they were like minded weirdos who liked rocks and woodchucks…. but then I read a friend’s post and realized Google could have directed readers searching for specific things to my little corner of the virtual hemisphere.

More than a little disturbing.

I admit I did write a blog about ukuleles a while back, but I promise you…. pictures of young girls doing it doggy style have never appeared on this page.

Likewise for that abomination! And while I was seriously tempted to Google it myself for the purposes of adding a comical image, that’s an algorithm I can most assuredly do without.

I did post ad nauseam about our trip to Sedona, though to be honest I don’t remember meeting any snake men uptown.

I have no explanation for dong diet whatsoever, though it was directly followed by ‘I really shouldn’t’ so that may be all the explanation you need.

Walking around the village, there were ample rocks.

This is the Maine coast after all.

We walked the harbor… taking in the sights, sounds and random clumps of rope.

It’s a place frozen in time and all the better for it.

A few old buildings have been spruced up for overnight accommodations, but there are no chain hotels and not a Denny’s in sight.

It’s first and foremost a fishing town, and unlike many of its southern brethren has managed to hold back the inevitable tide of “progress”.

If you’re ever in the area….

It’s definitely worth a look.