Now that my seemingly endless supply of liquor bottles were strategically arranged on the custom made shelves…. it was time to get down to business.

We have a favorite restaurant in Kennebunk that we haven’t visited for over a year. *insert audible sigh here* (The bartender is an old client of my husband’s and he’s been known to have a liberal pouring hand. I like that in a man.) My very favorite drink is made there and seeing that it’s won awards, I’m clearly not the only one who loves it.

Calling it the nectar of the gods doesn’t begin to describe it’s mood elevating goodness, but trust me… it’s close.

So when our barn bar was being planned, built and outfitted? This divine concoction was never far from my mind.

Having never made one, I searched the web for a recipe but only came up with an ingredient list. Being out of Triple Sec I substituted Grand Marnier… and not knowing their homemade sour ingredients, I had to settle for bottled. 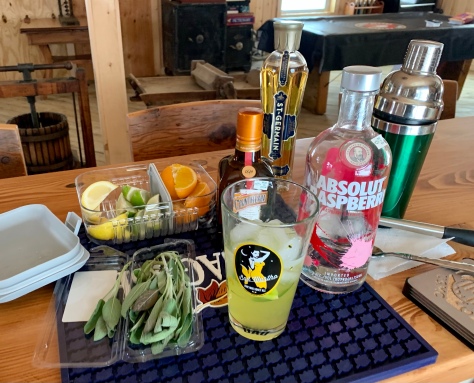 The results were satisfying… if nowhere near the ambrosia level of the original.

Cocktail in hand, it was time to whip the husband.

At Scrabble! My name is not Martha.

Game number one gave me a series of disastrous letters…. but I prevailed.

And the beginning of game number two?

( To answer your inevitable question… yes, I drew a ‘c’ Yes, I used that word. And yes, the husband added an ‘ed’ because in the end? He knew he was. )

28 thoughts on “Scrabble and the inaugural cocktail.”