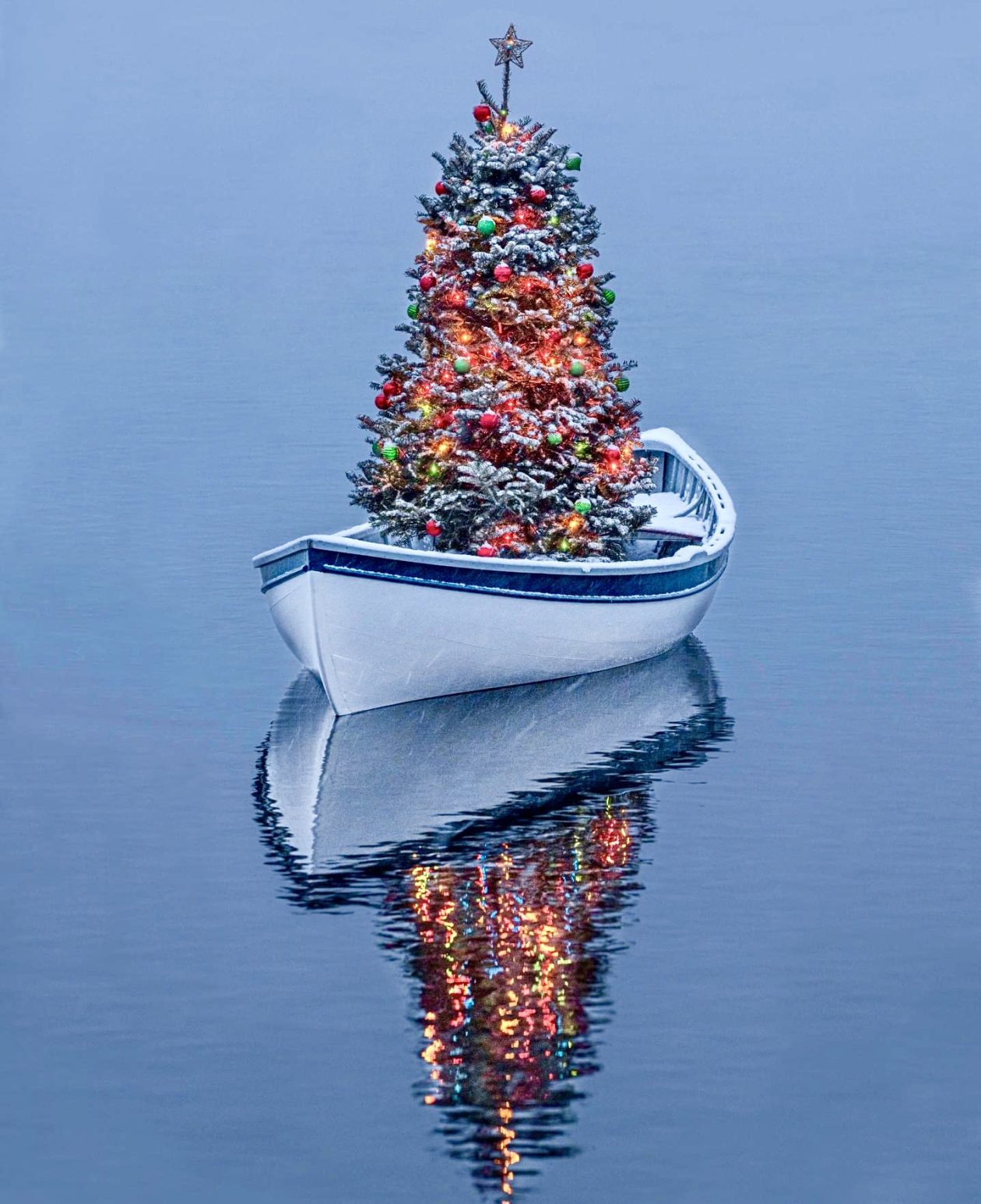 Yours truly was born in New Jersey and my late father was Vice President of a Wall Street firm. We spent a lot of time in the city…. and I never ceased to be amazed at the resiliency of New Yorkers.

They adapt and barrel through life with a determination to be admired.

Case in point? The new law stating only dogs who fit in a bag will be allowed on the subway.

What I love most about these pictures? Even the dogs are New Yorkers.

And while all of those dog in bag shots are wonderful?

I think this last one wins the prize.

Because we all need a little chortle now and then.

I hear ya sister.

This is a brilliant idea.

I shall be cc’ing the CDC immediately.

That’s pretty much been our last 10 months. You?

Rode hard and put away wet.

This is almost too true to be funny.

Wish that happened when I tried it.

Though I do firmly believe in sanitizing from the inside out when it comes to tequila….

Because I still enjoy a good chuckle.

No need to panic. The bad taste mandate is still in force.

They had one job….

With enough tequila? This is totally doable. 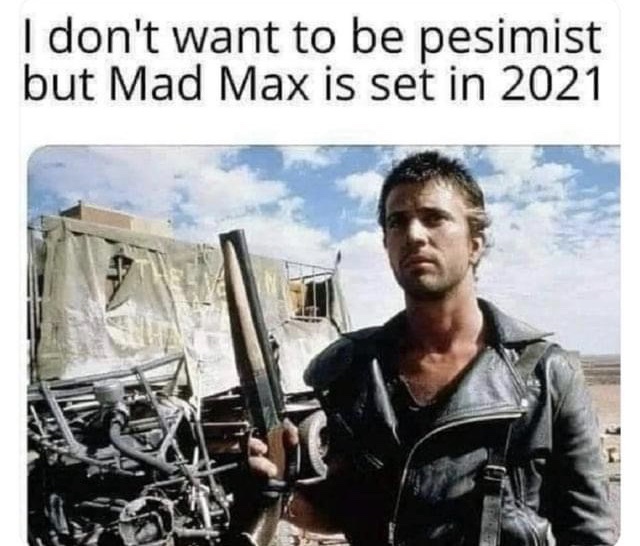 You mean that obnoxious little Kenny Markowitz was right all along? How bizarre.

We were back in the barn this weekend and ran the new heat pump for the first time. It’s a big space so it took a while to warm up… but the building held the set temperature all day, which means all our stuff and seal each and every god damn gap insulation work… 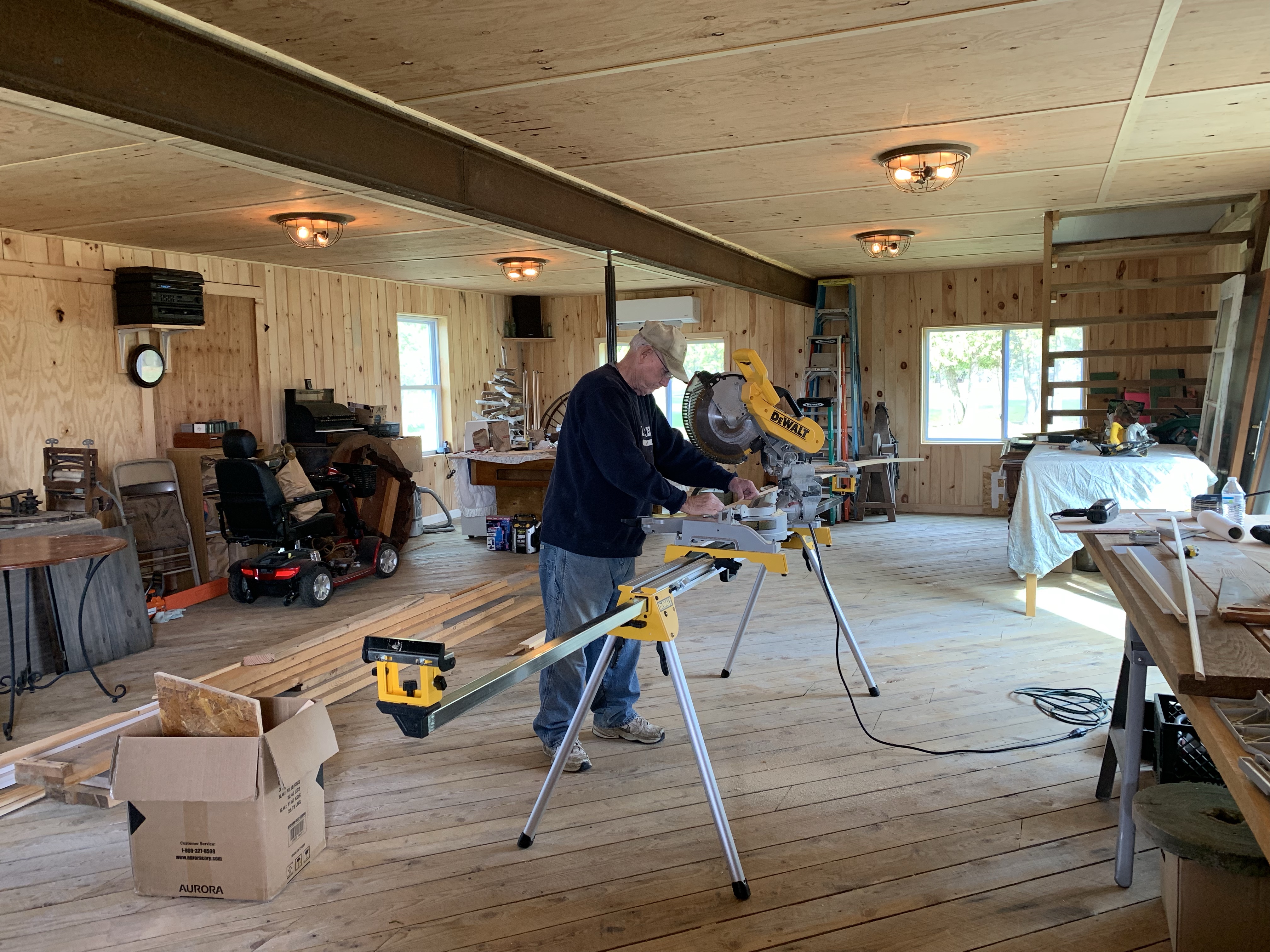 But there were still a few more windows to trim and that’s when things went downhill.

There was sputtering, mumbling, cursing and okay…. small pieces of wood may or may not have been flung across the room.

When the wood started flying? I knew it was time for a distraction… so I trudged down to our crap filled underground nightmare basement and retrieved a treasure we purchased a few years ago.

A neon bar sign from the Ommegang brewery in New York. We stumbled on them when we visited the Baseball Hall of Fame in Cooperstown and fell in love with their Belgians. 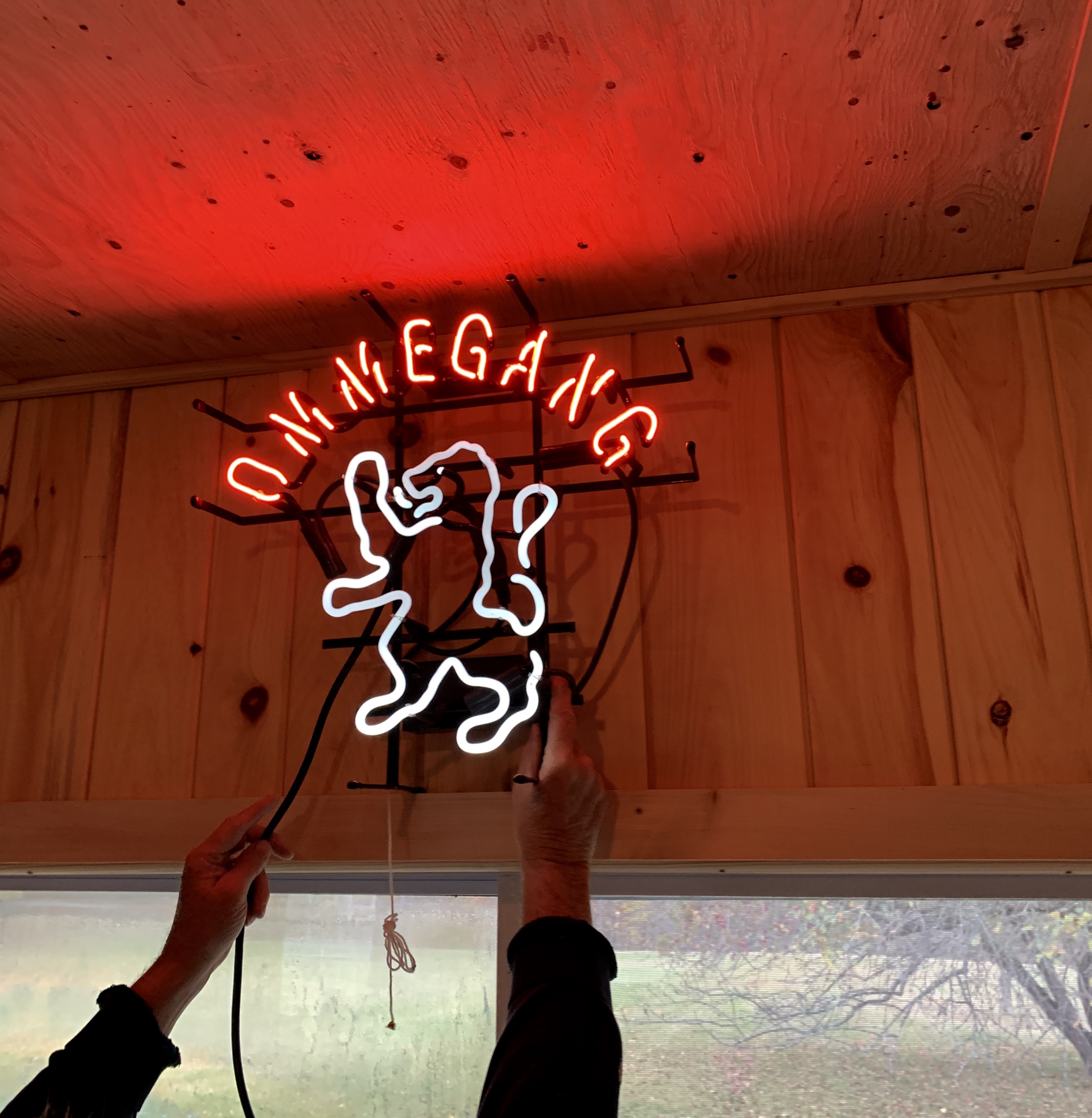 If you’re ever in the area, check out their tasting room in the old barn… and if you’re visiting this time of year? Try my favorite.

There’s a tavern in Brussels famous for it’s pigeon racing?

And speaking of Brussels…

When you live across the street from an organic vegetable farmer?

You never know what will show up on your doorstep in the morning.

Some of the best places we find are by accident, and had the weather been    more conducive to strolling…. we would have taken full advantage of this gem we stumbled upon.

At first we thought it was just a cool bridge….

With some interesting stone work…

But as we got out of the car and walked around…. 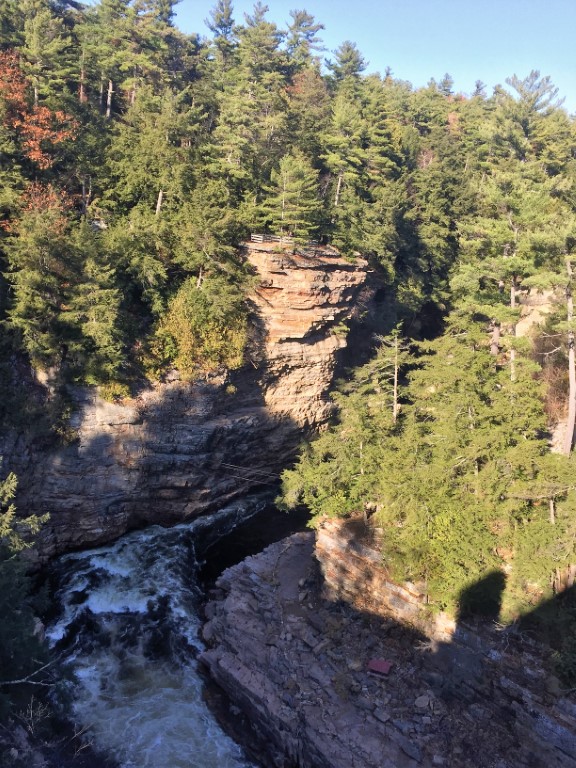 We realized the bridge spanned a massive chasm. 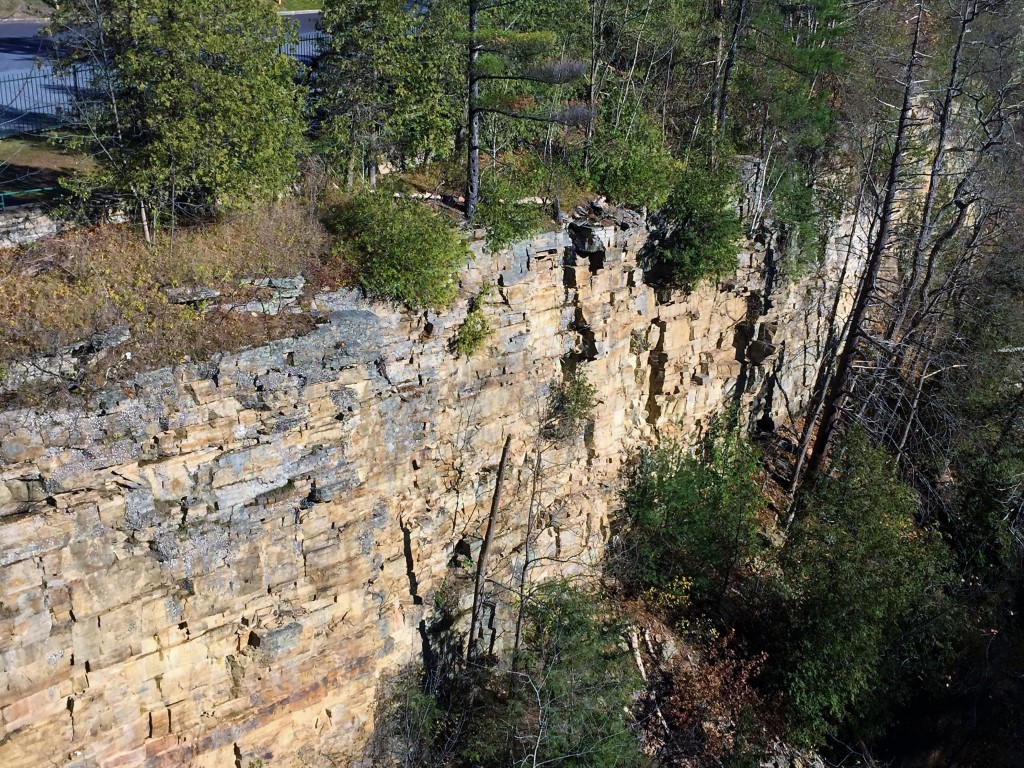 And it was actually a park you could explore…. with winding trails and breathtaking views.

Had it not been    a bit brisk to walk around, that’s exactly what we would have done. 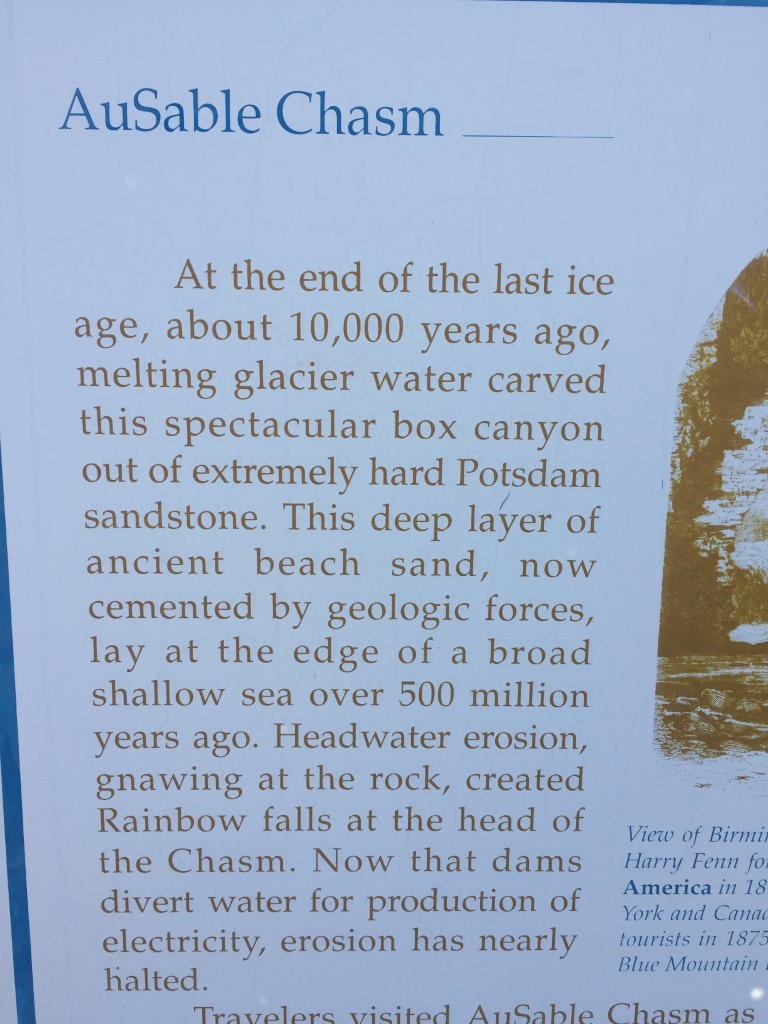 (5 points if you know the difference between a cavern and a chasm without looking it up.)

I’m not sure if you can tell, but in this next picture?

That batch of white stuff on the right hand side is ice, clinging to the trees and rocks from the spray.

I believe my husband might have said that once or twice. 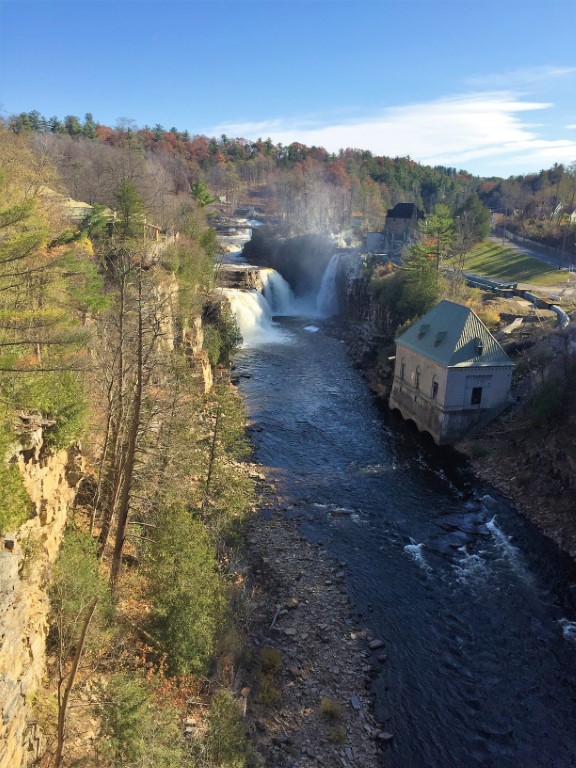 So yes, Ausable Chasm is on our list of  “return to when    the weather warms up”  places.

The third day of the Berkshire vacation dawned dreary and wet, so we slept in and got a late start.

We’d decided to drive over to New York State to tour Olana, a castle of the Hudson River Valley. The ride was wet and uneventful, full of the classic  “blurry, taken through the window, my husband was driving 85 mph”  photographs.

Those are cows, in case you were wondering.

As we neared the destination I figured I would look it up on my phone and get a little background….. which I should have done before we left because apparently you have to book a tour in advance and they were full for the entire week we’d be in the area.

I love me a good castle.

It was a little drier in New York… and here’s a photo of a fence.

Which would have been a photo of a glorious farm if the husband wasn’t Mario Andretti. I have scores of  that was supposed to be  “insert fabulous subject matter here”   photos.

You can always tell where I’ve been by the great photos I’ve missed.

So we drove aimlessly through gorgeous farm country and scenic mountain valleys. Shame you won’t see any of it here.

And before the food police hit their sirens….

We stopped at a main street diner in some podunk town I don’t remember the name of and had lunch.

Grilled chicken salad melt for me, hot turkey sandwich for the husband. Okay?

The town next to the podunk diner town happened to be Kinderhook,  (children’s corner in Dutch)  the home of the 8th President of the United States, Martin Van Buren… so we said why not? And took another tour.

We’re nothing if not boring. 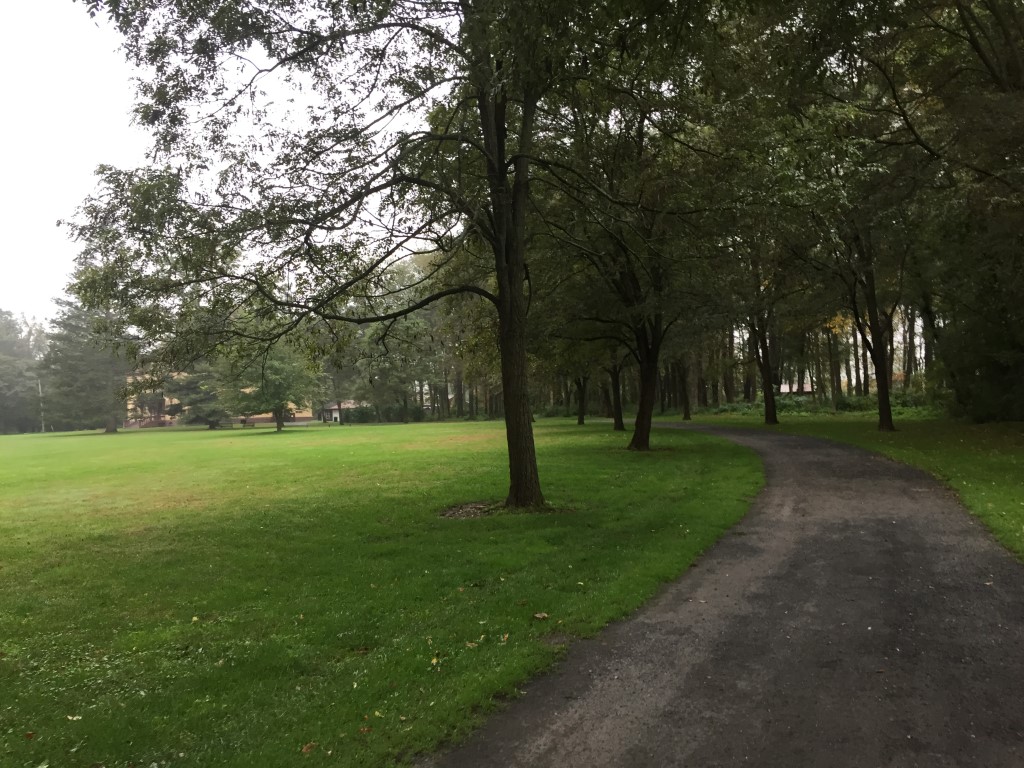 We got our tickets and it started to rain, naturally.

So we sprinted soggily down the lane towards the house, Lindenwald. 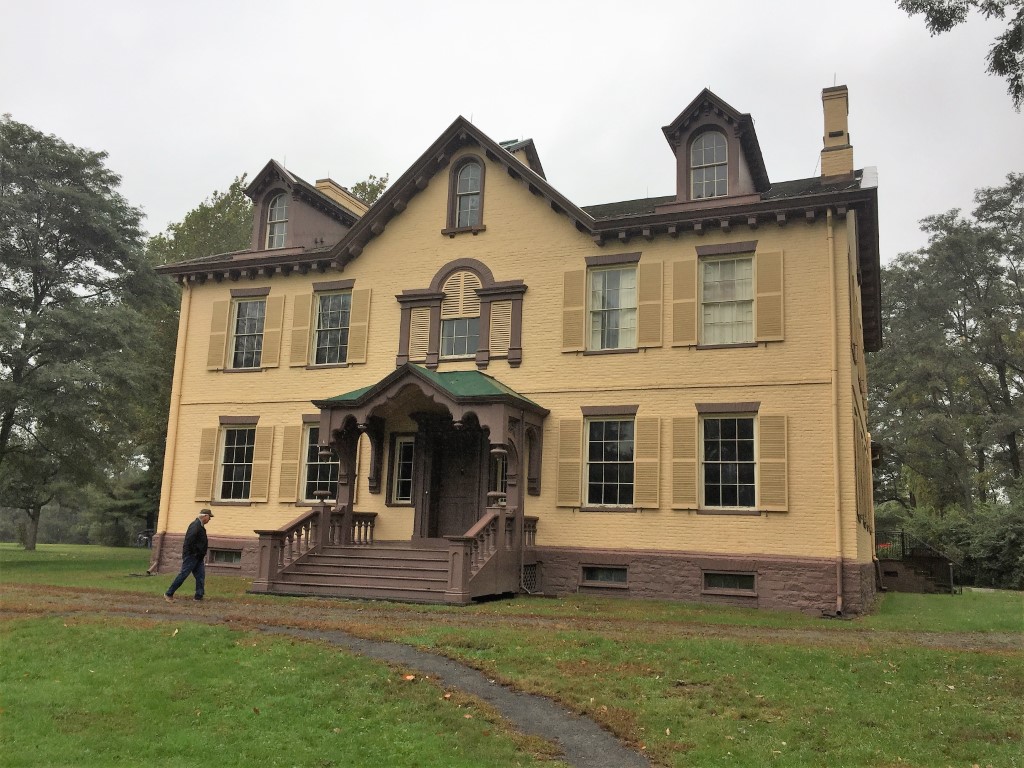 There’s the husband huddled on the porch waiting for the Park Ranger. Doesn’t he look thrilled? 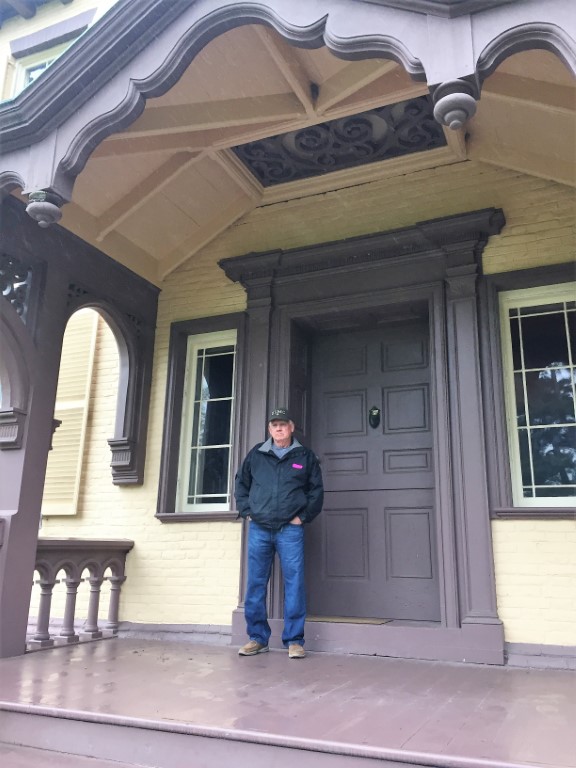 We were the first ones there and had to wait 20 minutes for the rest of the group to show up. How fun!

As a friggin’ tomb. They keep the shades drawn to block the sunlight that will fade the furniture and wall paper and won’t let you use a flash to take pictures. Yay! 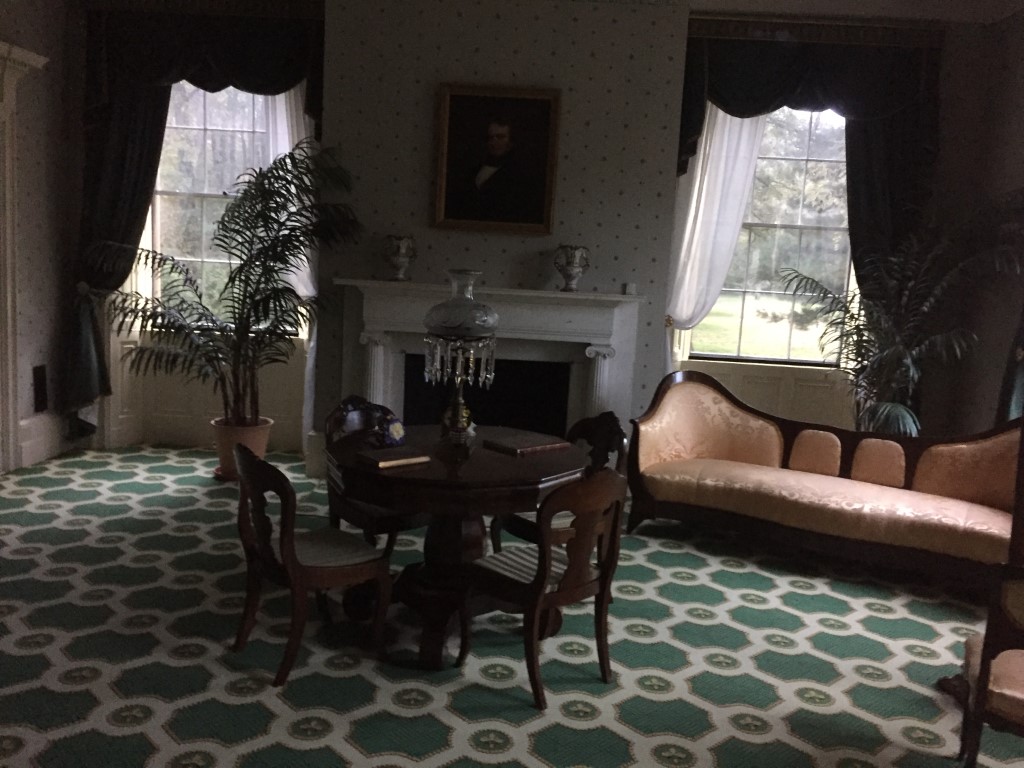 After much cajoling and since there was absolutely no sun, I managed a few brighter shots. 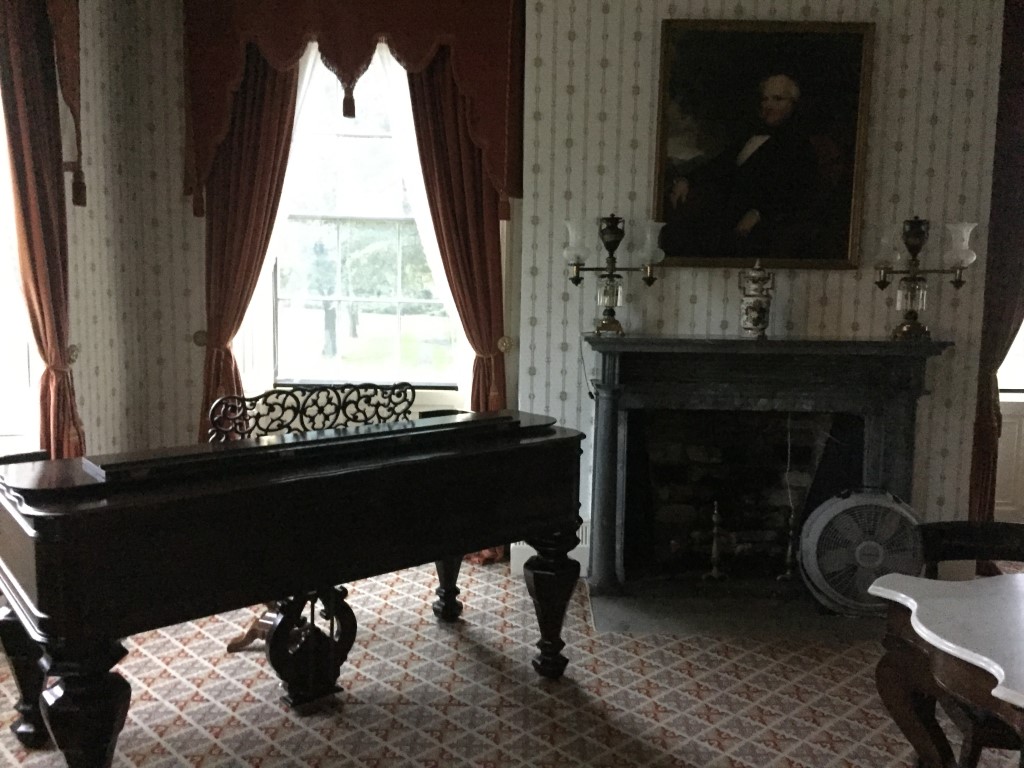 The presence of the portable fan kind of killed the aesthetic, but at least I could see it. 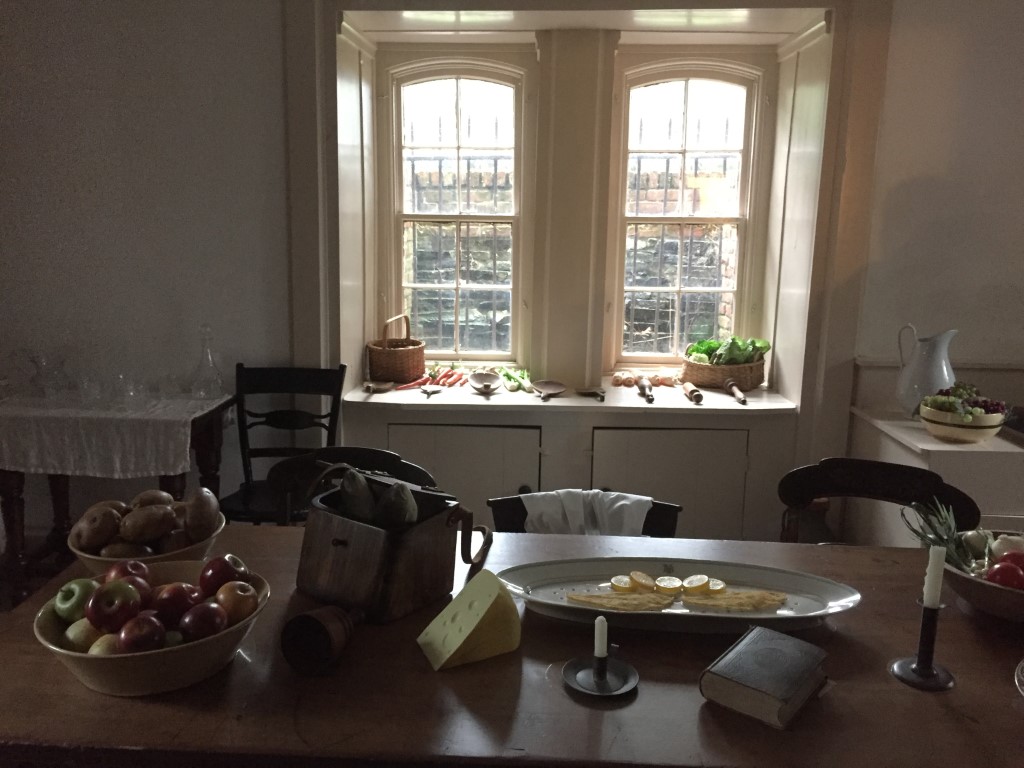 I can’t say I knew much about good ole Martin, or that I ever really wanted to…. but there was a lot of interesting American government history related by the ranger. Enough to know these good and simple men of yesteryear would be spinning in their graves at what’s going in Washington today.

Even during his years in the White House, Van Buren listed his occupation as “farmer” on his taxes. That speaks volumes.

The home wasn’t grand, and housed multiple generations of his children and grandchildren. This tower of stairs as seen from the second floor, lead to nowhere… but you know the grands probably loved racing up and down them daily.

Since the house wasn’t large enough to accommodate a banquet hall, Martin ordered and stuck his long dining table right in the front hall for state suppers with dignitaries. 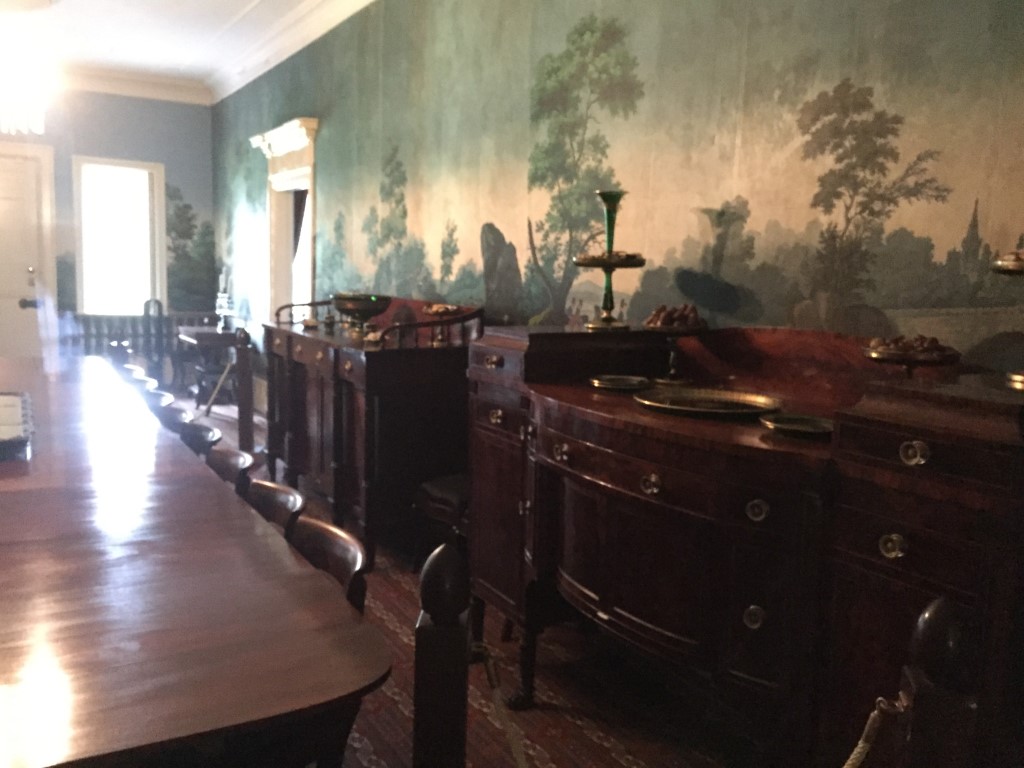 An entry in his journal from later years spoke of a meal he had with Abraham Lincoln. Apparently he laughed so hard at the young Lincoln’s jokes, his ribs hurt the next day. 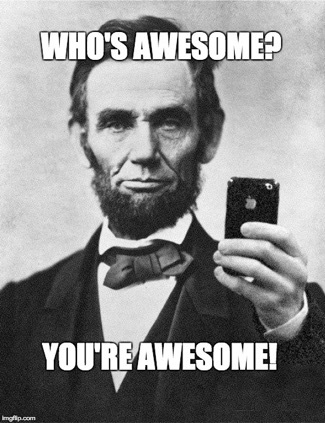