This is for the food (and drink) people.

An entire post devoted to our final meal in Virginia. (That’s 2 in 3 days so no more complaining!)

(On a side note, it was Bogart day last Sunday and the husband and I did nothing but eat, drink and watch the classics.

The Maltese Falcon. Key Largo. The Caine Mutiny. African Queen. And my all time favorite movie … Casablanca. I cry at the nightclub scene when they drown out the Germans by singing La Marseillaise… every damn time! Good stuff.)

But back to food.

After spending 8 hours in an antique store that day I was in dire need of a cocktail.

And when I saw a sign for Eddie Romanelli’s?

I may have squealed.

I didn’t think this was a chain, but there was one in Wilmington, North Carolina we used to make a pilgrimage to every other month when we lived down south. Their Crabmeat Cannelloni in Carolina Shrimp Sauce? 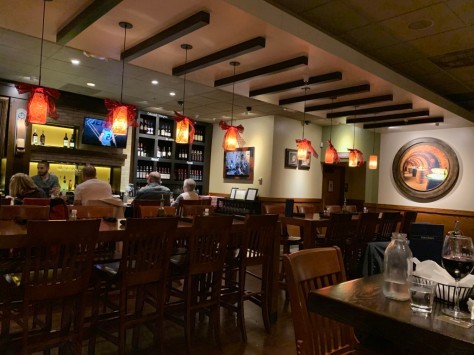 We sat at a high top in the bar area because of it’s… ya know.

Proximity to the cocktails.

Sadly the crabmeat wasn’t on the menu, but the fresh baked bread with herbed olive oil was wonderful.

As was the Caesar salad. 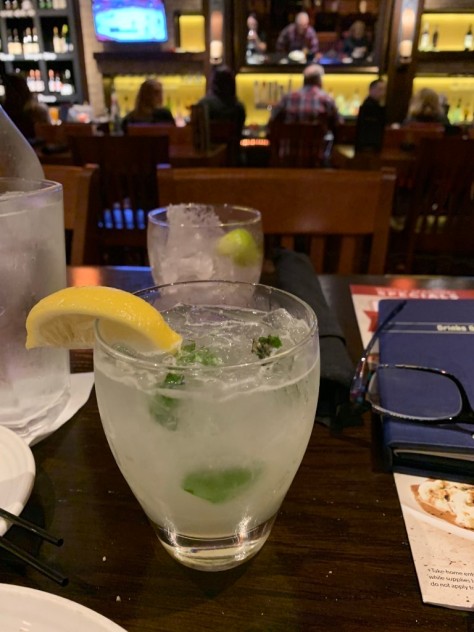 And the sparkling Tuscan lemonade. Fresh, crisp and quite delightful.

Husband had a juicy charbroiled steak with garlic sauteed spinach…

While I indulged my inner Italian with some pasta…. drenched in garlic Parmesan cream and loaded with grilled chicken, mushrooms and peas.

Were there more cocktails?

And damn that waitress for not clearing them as fast as I could drink them.

I’m going to blame the cocktail consumption for this last picture I took on the way back to the resort…. 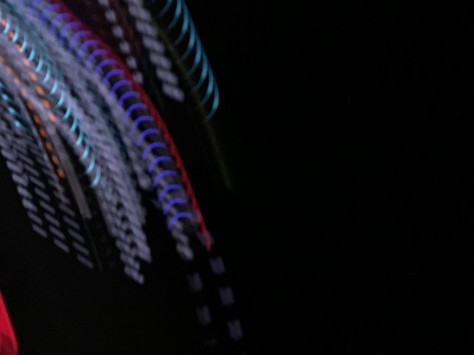 Because I have no idea what it is…

Or what it was supposed to be….

But trust me, it was fabulous.

During the 17 years we lived in North Carolina, we never managed to make it to the Outer Banks… though not for lack of trying on my part. So on Day 6 of this vacation? A three hour road trip. 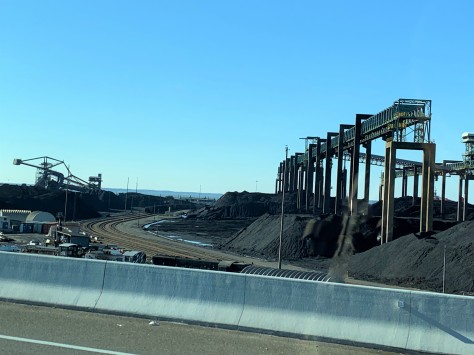 Past the Lamberts Point Coal Terminal in Hampton Roads…

The largest coal exporting port in the country.

And if you think it’s pretty? Just imagine how nice it smells….

Over and through the Hampton Bay Bridge Tunnel…

And past some tempting tourist attractions.

Is it shocking we didn’t stop?

And we were there.

The Outer Banks of North Carolina.

The Graveyard of the Atlantic. 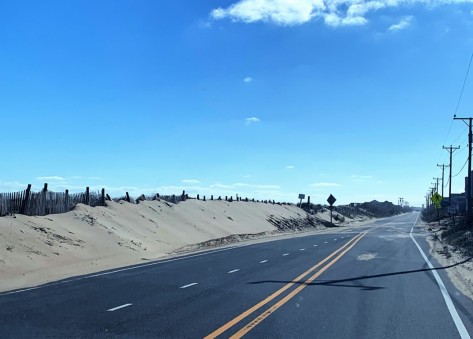 Where the wind was so fierce it was blowing said beach right across the road when we got there.

It had been a mild 48 degrees in Williamsburg, but here?

Beachfront condos and rentals were everywhere. 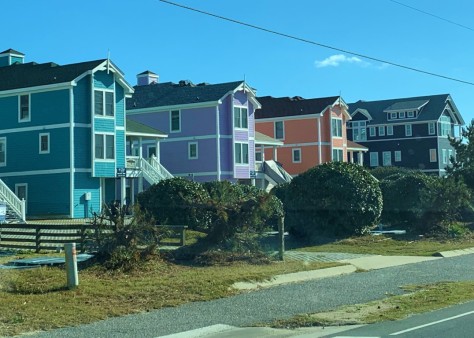 And in every color you can imagine. 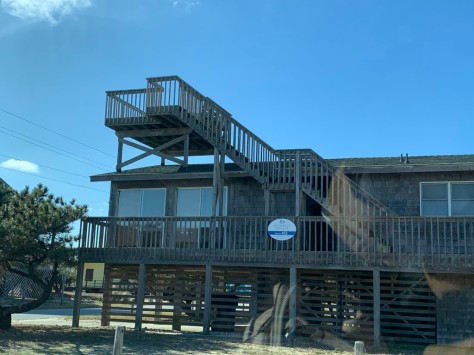 No worries, just build a deck on yours. 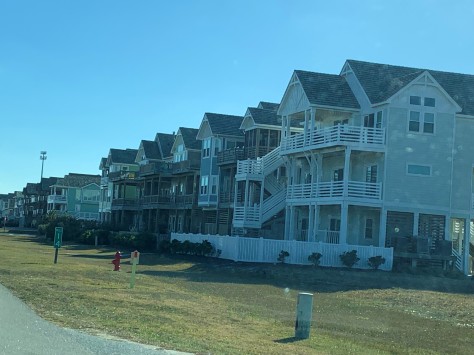 It never ceases to amaze me how little property they can build on these days. Our town has a 3 acre minimum….

At the Outer Banks? It must be 3 inches.

And though we were getting hungry for lunch…

Damn… and I really wanted to see how awful it was.

But since we have a good friend named Richard, who is sometimes called Dick? 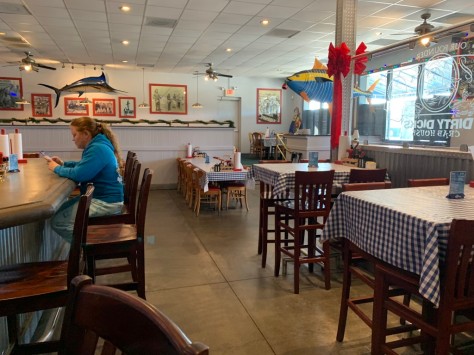 I got my crabs from Dirty Dicks.

My She Crab soup that is….

And my Ocean Blue Margarita in a disappointing plastic cup as they had run out of funny bar glasses…. or so we thought.

I’m not a Bloody Mary fan…. but that looks like a meal in itself.

The husband had mussels and lamented over not getting a glass for his collection.

(Oh, did I tell you? Along with all the other things he collects… he has now decided to acquire a glass from every fun bar or restaurant we visit.)

Did this place qualify as fun? 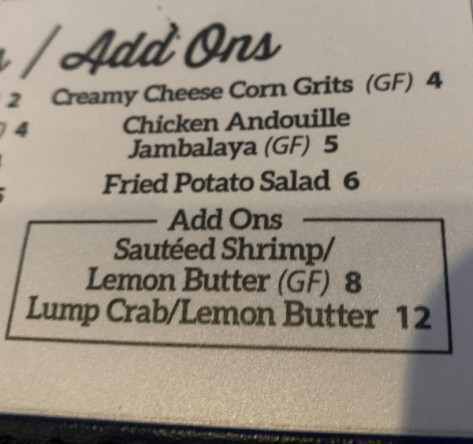 But with fried potato salad on the menu it definitely qualified as southern.

Finished eating, the husband asked the waitress to rinse out the plastic cups so he could bring them home to our friend as a joke…. which is when she pointed to us to their entire store of Dirty Dick merchandise.

We should have known.

But it was too good to pass up and we bought him a hat, a t shirt and a bumper sticker for Christmas.

Although I hated to end our day, the time was drawing near and my phone battery was gasping it’s last breath.

Naturally the husband had to see the blacksmith’s shop with all it’s rusty tools.

And we were both surprised to learn that women worked there as well back in the day. 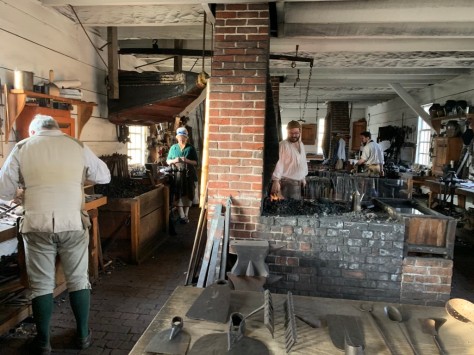 So after test driving a wheel barrow… 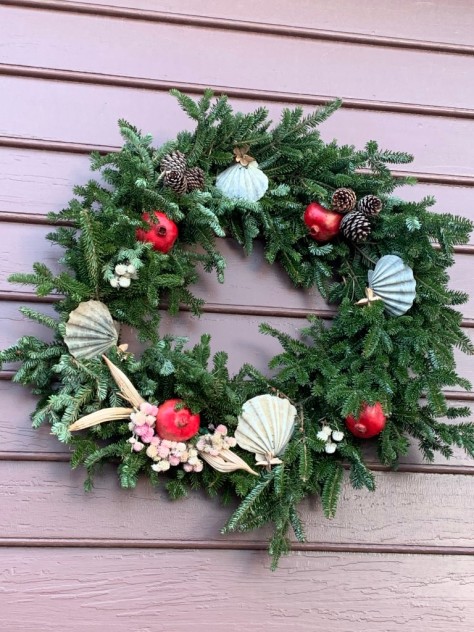 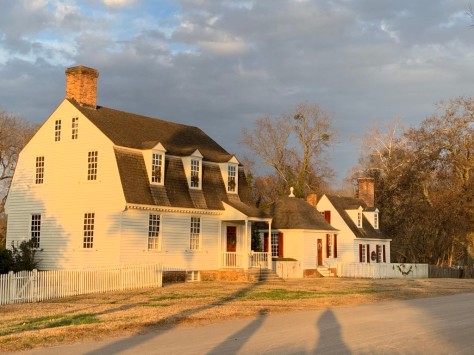 And a massive Live Oak that is supposed to have been here when George Washington walked these streets….

We said goodbye to the cows we saw on the way in…. 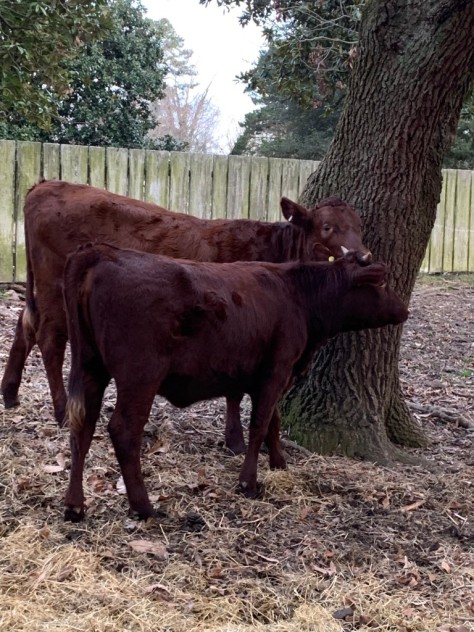 And went back to the car where we had to charge my cell phone long enough for Trip Advisor to point us to our first dinner in Williamsburg. 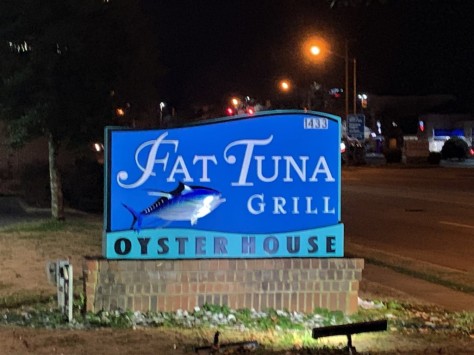 I love that app. 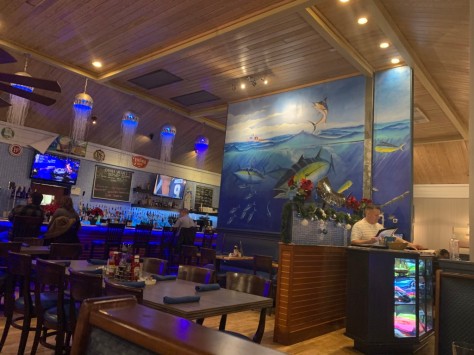 And I loved this restaurant. 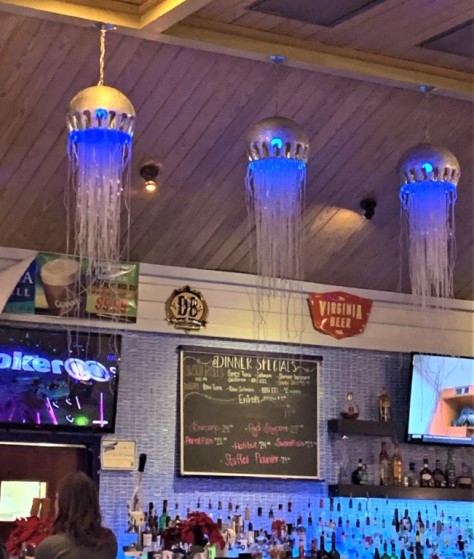 Come on…. they had blue jellyfish lights over the bar.

How could you not?

Their Orange Crush was made with fresh squeezed OJ and was fabulous.

Hushpuppies and cornbread let us know we were in the south.

And may I just say? I had no idea how much I missed hushpuppies until I started eating them again.

Dinner was tough to choose.

I was in the south, baby! Bring me those low country shrimp and cheesy grits.

Lord have mercy….. they were the best thing I’ve eaten in months. 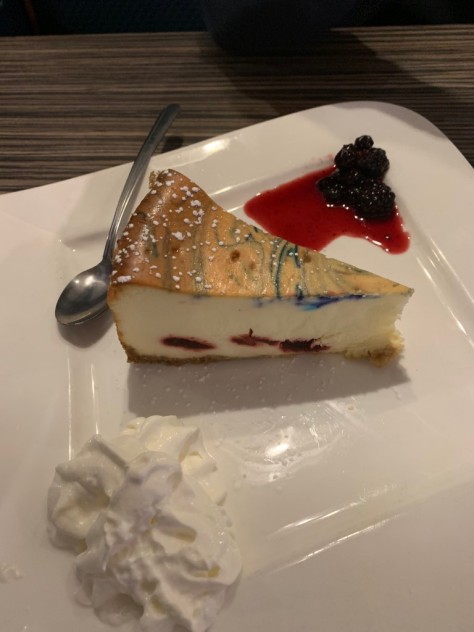 Husband had room for a New York Style berry cheesecake….

And then we called it a day.

You realize that, right?

It took me 8 posts to get through Day 1 of our two week vacation.

Oh, don’t be so dramatic.

We’re back from 2 fabulous weeks in Williamsburg, Virginia.

It was a wonderful trip…. and yes, you’ll hear about it ad nauseam in the near future.

But while I tried to keep up with comments on my mobile, I’m afraid I didn’t have the time ( Or the inclination, let’s be honest! ) to read all your blogs while we were gone.

I was busy biscuit and gravy-ing my way across the south….

And that requires dedication.

( Not to mention larger pants. ) 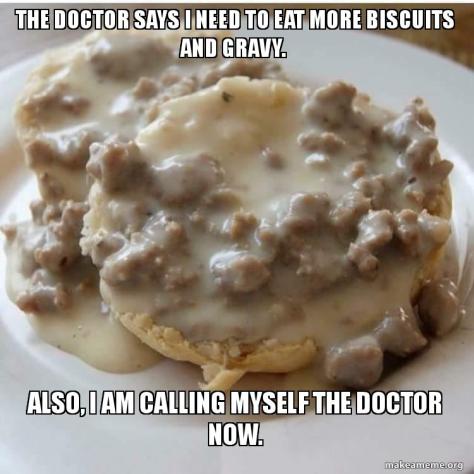 So here’s hoping you all ring in the New Year with the ones you love!

(Or the ones you can tolerate with a few drinks under your belt… whatever works. )